Expertise is assured.
Comfort is complementary.

A 91-year-old man has apparently made a miraculous recovery after sustaining severe injuries in a car accident. The patient, Laxmilal Jain, suffered head injuries and fractures on his arms and legs, but after being treated for two weeks at Hinduja Healthcare Surgical Hospital in Mumbai's western suburb of Khar.

Despite his advanced age and several complications during treatment, Laxmilal is now able to lead a normal life after several procedures. 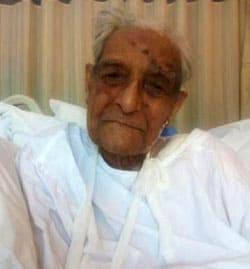 Being a cancer survivor, Jain, who had fractured his right thigh bone barely a year before the mishap, was no stranger to being injured or admitted in hospitals for prolonged periods of time. His survival streak continued as after several days of being on ventilator support and undergoing blood transfusions, he was declared fit to undergo the surgery.

Doctors at the hospital said the patient had to intubated as well as ventilated since he was suffering from left ventricular failure with poor ventricular function. He was also anaemic due to acute bleeding and his condition was corrected only after being administered fresh frozen plasma (FFP) through blood transfusions.

Jain was admitted to the hospital on June 14 and was discharged several days after he underwent an open reduction and internal fixation surgery for his upper right arm and left thigh bone which were severely fractured. Doctors further said that what made the surgery more challenging was the fact that he had multiple episodes of arrhythmias in the ICU which had to be stabilized. Intensivist Dr. Yogesh Velaskar said, "Throughout the time, around 20 days, he was in the ICU. He was suffering from several conditions and hails from Jalna in Aurangabad. Surprisingly, he responded to treatment earlier."

Dr. Khushrav Bajan, an intensivist and senior cardiologist Dr Navneet Kumar also treated the patient during his stay in the ICU of the privately run hospital.

While the surgery was successfully conducted by orthopaedic surgeon Dr Rajveer Chinoy and spine surgeon Dr Abhay Nene. Jain was kept under observation for eight more days. The 91-years-old man is now relieved that he he isn't suffering from bed sores or any other complications like deep venous thrombosis and pulmonary embolism that tend to afflict senior citizens due to prolonged immobilization.